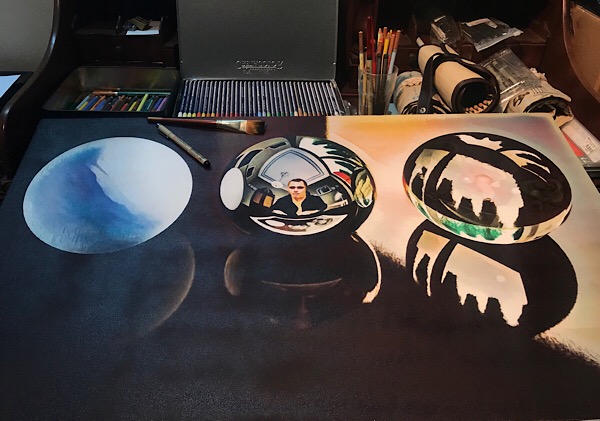 To draw a seemingly impossible painting, you must first become the canvas.

This one titled “Portraits in 3 spheres” is probably the most complicated work I have done so far — here is a painting of a reflection silhouette of me looking back at myself, amused at the very same painting placed in front of me — me, staring back at me looking at myself with an eerie distorted mirror image, a ‘refracted’ silhouette ‘reflected’ off another shiny surface, captured is an elaborately recursive theme — There are 3 spheres, of equal size, but different in aspect, placed next to each other on a shiny table, in an imaginary scene set in 3 dimensions. The one on the right is made of clear glass, not only is it transparent, but it also reflects. It kinda magnifies the structure of the table top on which it rests and at the same time mirrors an open window. The sphere on the left, has a translucent, diffuse, matt surface, it presents a light side and a dark side with better clarity than the other two.

The spherical mirror in the middle distortedly reflects all of the surroundings and features contained in the room,  while I am observing myself and also observing everything behind and around me — replete with multiple features of the surrounding space reflected in it.

In 2 ways I attempt to capture in a single frame, a triple unity — not only does the scene reflect and refract its surroundings to the left and right, but all three of spheres are shown in a painting on which I am working —  captured in the reflection within a reflection, the surroundings, an open window by the side, the ceiling, a bunch of features, including a picture of me in front of the very same painting that is being made — to make it a wee bit eerie, there is a Linkin Park song cover playing in the background — titled Shadow of the day & if you will observe carefully, there is a silhouette of Chester Bennington warped in the sphere, staring back into the view of the world from wherever he is — Whatever your mind imagines defeats reality if you allow it to flow..

The apparent perception of the passage of time relates to an ability to generate new thoughts and its associated imagery. When the concept of thought gets conquered — time stands still. Some day!!! Some day, the shadow of the day, will embrace the world in gray & the sun will set for you too ?

The table reflects the spheres on top of it, the spheres reflect each other as well as the table, the painting of them and me painting them. The endless connections which all things have to each other, the all pervading light illuminating and reflecting off every sphere and every sphere reflecting not only the light from every other surface but also every reflection of every reflection throughout the scene.

That is the world — that of people, each one reflected in the minds of others, who in turn are mirrored in yet others and so on.